Learn what is network topology and its types in Computer Network.

In a computer network, the computing devices connected to each other over a shared or dedicated medium. The network topology is the way devices connect. E.g a device may connect to another device via a direct LAN cable or it may connect via another intermediate device, such as a router, hub, etc.

Each type will cover the basic information regarding each topology.  In a computer network, there can be five different basic types of the way a group of computers connects to each other.  Following is the description of each type.

This is the most simple and basic type of network topology to connect multiple computers to each other.  In a bus topology, there is a single cable name as Backbone cable. When a computer needs to send a message to another computer.  The sender places the message on the wire, each computer reads the message.  The intended recipient only processes the message.

Instar network topology each device connects to each other via a central device. The device can be a HUB, Switch, or Router.   When a device needs to send the network packet to another device, it sends the packet to the central device. That routes message to the recipient.

In-Ring network topology type. Each computer connects to other computers directly or via neighbor computers. On failure of a link between two computers, break the communication only in one direction. 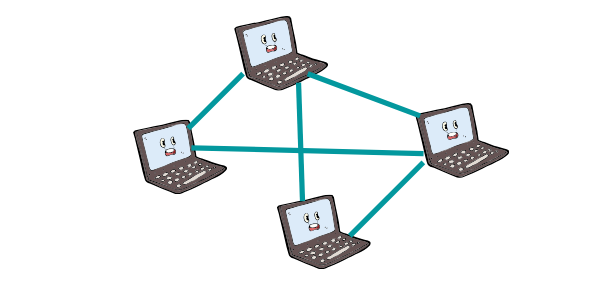 As the name suggests, it’s a mess of links between computers. In mesh network topology type. Each computer may connect to another computer directly or via another one or more computers.

In the tree type of network topology, each computer may have one root computer and one or more branch computers. Similar to a natural tree. It is a combination of bus and star topology.