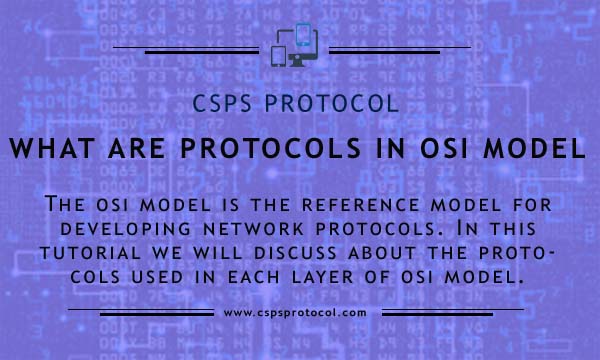 What are the protocols in the OSI model?

DHCP is an application layer protocol. In a real implementation, DHCP works over TCP/IP protocol.  The full form is the Dynamic Host Control Protocol. When a network connection comes up. Computer needs and IP address to work in a computer network. The computer which is connecting to the computer network works as a DHCP client. It requests the server, to get the IP. You might have seen while configuring the IP address for the Ethernet card or LAN card on a Windows machine.  The internet router works as a DHCP server in this case.

ARP stands for Address Resolution Protocol. It resolves an IP address to the MAC address of the Ethernet card.  ARP is the data link layer protocol in the OSI model.

This is a domain name system.  It is an application layer protocol.

It is another example of a layer four (transport layer ) protocol. It is a relational protocol.

SS7 itself has many layers. Following is the tabular mapping of ss7 protocol layers with the OSI model.

Telnet is an application layer protocol of the OSI model. It is for remote operations over the computer network. Uses TCP/IP for the transport of telnet protocol messages.

Sip is a session initiation protocol used in the VoIP network. This belongs to the application layer of OSI.

IP is Internet Protocol, it is a layer 3 protocol example of the OSI model. IP uses the services of the data link layer and provides services to the transport layer.  The transport layer examples are SCTP, TCP, UDP, etc.