What is the TCP three-way handshake?

The TCP is an example implementation of the transport layer protocol according to the OSI model. It connection-oriented, which means before sending any data to the remote peer, the TCP client sets up a virtual connection over a packet-based underlying IP network.

A three-way handshake is a protocol procedure to set up a both-way connection between two peers. The tutorial will cover the TCP connection setup procedure in detail.

The first question comes to mind, who is responsible for starting a TCP connection?

The protocol layer itself, on startup or some other external entity, instructs the layer for connection initiation? The answer is TCP user is responsible to trigger the TCP three-way handshake. For example, HTTP ( a web browser such as chrome uses HTTP), is a user of TCP. When the HTTP user needs to send a web request to the remote server.

The following are messages in the connection setup procedure.

Following is the message flow for a three-way handshake. 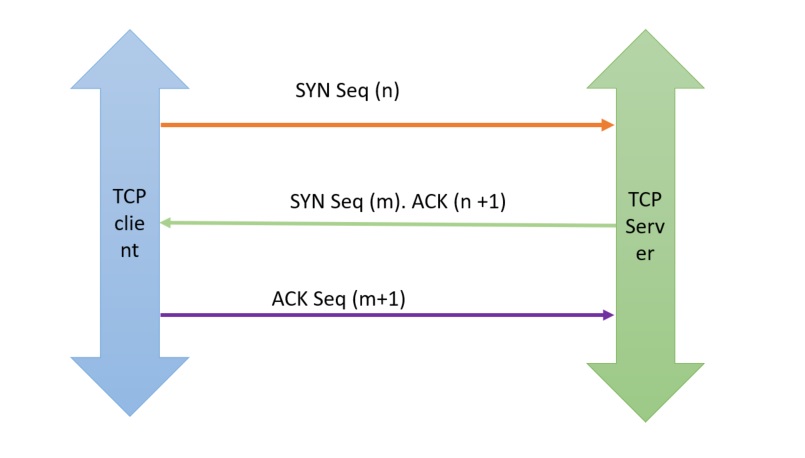 The user of HTTP issues a connect request to the TCP layer. TCP layer works as a TCP Client and sends the TCP syn with an initial sequence number. The sequence number is to maintain the sequencing of messages. Because TCP delivers messages to the user in sequence.

This is the first packet from the client to the server. TCP message set SYN flag to 1 in the message, so make the TCP message as SYN segment. It has the initial sequence number of the client along with a few more parameters.

The final packet for the connection setup is TCP ack. The client sends a TCP ack packet upon receiving TCP syn ack from the server. The packet includes a sequence number from the server plus one.