What is SRVCC call flow in GSM?

In the LTE network, SRVCC is a feature by which a UE can roam from EUtran to Utran (or vice versa) and other networks without disrupting an ongoing call.  The LTE  is packet-based while UTRAN or GERAN is a circuit-based network for voice calls.

In this tutorial, we will describe the SRVCC call flow from E-UTRAN to UTRAN.  All the details are as per 3GPP specification ETSI TS 123 21.

What is the SRVCC call flow trigger point?

The triggering point is, when the UE sends a measurement report to the eNodeB, that the cell in another RAT type is more suitable.  After that eNodeB instruct the MME for the handover is required. Next, MME instructs the other network components to initiate the SRVCC procedure.

This section details all steps in the SRVCC call procedure.

After the above handover sequence, there will be a circuit setup between the MSC server and MSC. Now the existing voice can use this path. 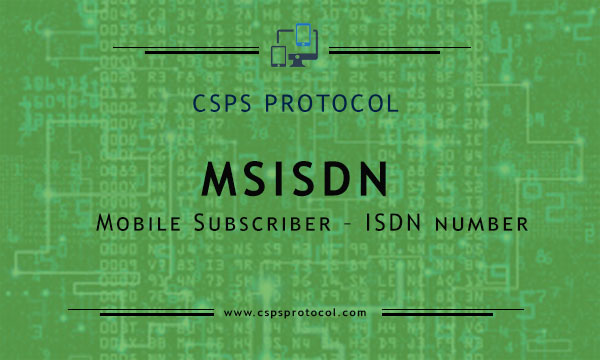 What is MSISDN or Phone Number? How to check the phone number from the SIM?

In simple terms, it is your phone number that other mobile subscribers use to call you or send a text message. A mobile operator assigns a subscription against it.

MSISDN is an abbreviation for Mobile Subscriber – ISDN Number. It is a sequence of digits with a maximum length of 15 digits. The exact length varies per country. It is used to uniquely identify a mobile subscriber on a global scale.

MSISDN is more than just digits at the network level. Along with the dialed phone number, it contains further GSM protocol information.

The mobile operator of a country gets its range of numbers from the standard GSM body. The SIM card subscription on HLR has IMSI and MSISDN as the primary keys for a subscriber record. A subscriber can obtain the phone number or MSISDN digits from the device by various methods.

What is MDN and MSISDN relation?

The MDN stands for mobile directory number, it is a dialable number in the CDMA network that can be used for calls and SMS. It is equivalent to the MSISDN in the GSM network. You may aware that a CDMA handset does not carry a SIM card. So change in MDN may need to change the handset.

How does a mobile operator allocate MSISDN to the SIM?

On a network attach, HLR allocates to the sim card. Generally, this remains the same, but the serving mobile operator can change it at any time.

For a mobile terminated call, the GMSC sends the SendRoutingInfo GSM MAP operation with the dialed MSISDN digits. If a subscriber is online and allowed to receive the call, HLR returns SendRoutingInfoResponse with the MSRN and roaming MSC/VLR information.

Over the mobile network, an MSISDN carries information along with dialed digits. E.g., If a number is national or international.  The format of MSISDN is in E.164 over the network, according to ITU-T. The additional information helps to decide the routing and other things. For example, if a number is of type international, the first few digits are the country code, and the call will be routed outside the country if it’s for another country.

What is Format for MSISDN?

The above-mentioned format is international. To dial a number, a + sign at the start is required. Each subfield is discussed in detail below.

Mobile Country Code(CC) is 1 to 3 digits long.CC Indicates the country to which the number belongs. When a mobile subscriber dials a local mobile phone number, the country code should be omitted. A zero may be substituted for the country code.

For dialing outside of the country, the national format is used.

NDC or National Destination code: Identifies the area of a network operator, within a country.

Subscriber Number (SN): Also referred to as subscriber digits. These are chosen by the mobile operator. The SN is appended following the CC + NDC.

In another tutorial, we have mentioned details about IMSI, which is another global identity for a subscriber.  Both can be used to route messages toward the home network of the subscriber.

But there are key differences. The following are the details for MSISDN and IMSI comparison.

How to check the phone number from SIM?

When a new sim card is purchased, the box has a printed phone number. It takes some time to memorize the phone number. But meanwhile may require to know what is my phone number from the device itself. The following are the way to know MSISDN or phone numbers.

Find the phone number from about phone:

Get number programmatically on android: