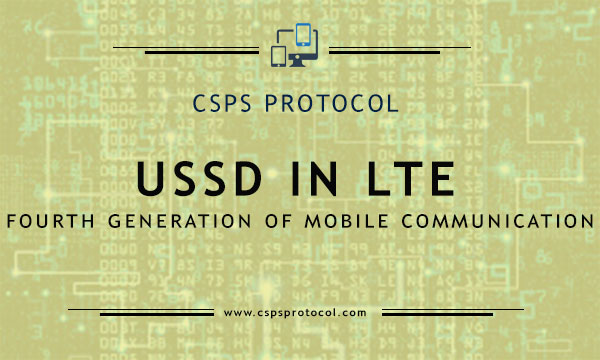 LTE comes under the fourth generation of mobile communication. Provides much higher speed than its previous generation which is 3G.  LTE is the data only network. USSD service will be available on LTE too. On LTE all services will be on data network. This will be after full implementation of IMS. IMS is for deploying multimedia services over IP network. The Voice over LTE and VoLTE, is one of the example of IMS.  If the network does not support IMS, the roaming network does the fall back to 3G.  For example, if a phone is attached to the LTE network and mobile subscriber dials a USSD Code. The UE fall back on 3G and do location update with the HLR over ss7 network.  Which attaches the phone . Then roaming network sends the USSD to the hone network. Once the USSD session completes, UE again attaches on LTE. In this ussd tutorial we will cover ussd session details over LTE network.

With the pure LTE network, UE will use IMS for USSD. The protocols and call flows will be changed. The protocol for ussd will be SIP or session initiation protocol.  The USSD over LTE or 4G specification is given in 3GPP Standard.

The ussd in lte, uses sip protocol stack. Sip is an application layer protocol which is specified in  RFC 3261.  As IMS uses internet protocol, so sip runs over UDP transport protocol. UDP uses , internet protocol. Application over ussd, uses the services of SIP layer. For sending USSD to the home network. Application in UE, request the SIP layer, to initiate the transaction. For an USSD which is initiated by the core network, SIP layer gives the indication to the application for a new request from network. SIP layer maintains a ussd session.  With IMSI phone will have standard application for ussd.

Similar to 3G network, LTE provides handset initiated USSD. When mobile a user dials the USSD code. A SIP INVITE message is sent from roaming network to the USSI As. The USSI As is located in the core network.  SIP message have ussd code a string. The code is identified by the USSI AS.  If all OK and USSD application have recognized the ussd code. Application replies with the menu. USSD menu is the string.  SIP INFO message carries the response menu string.  Invite message carries SDP. SDP is setting up for media or voice session. But in this case there will be no voice.  SDP have port number zero. Similarly in response in INFO. SDP have port number zero. To end the session any side can send BYE SIP message to other node.

This is the case where , core network want to display a ussd menu to the handset over LTE network. The flow is similar to the mobile initiated call flow. But the INVITE starts from USSI AS.