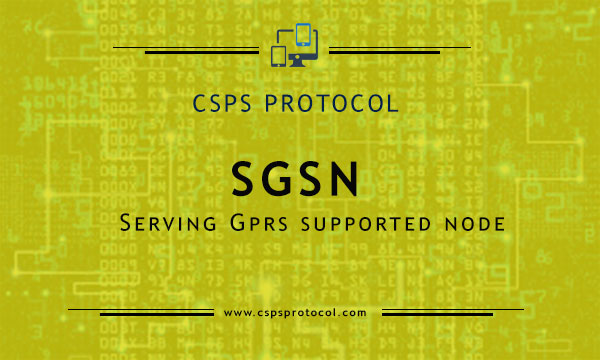 SGSN full form is, Serving GPRS support node. When a mobile subscriber roams from one location to another.  The VLR and SGSN in the roaming network keep changing. At what distance the roaming nodes will change, depends on the area covered by each node. The VLR is used for voice and SMS. The SGSN is used for mobile internet services.  In 2G network, the mobile device connects to BTS over a radio channel, BTS connects to BSC and BSC connects to SGSN.  The protocol between BSC and SGSN is BSSMAP.  In the 3G network, the mobile device connects to NodeB over a radio channel, NodeB connects to RNC and RNC connects to SGSN. The protocol between SGSN and RNC is RANAP, for location and registration. For data tunnel management protocol is GTP.

Gr Interface: Interface between Roaming-SGSN and HLR. It uses the Ss7 protocol stack.

S6d Interface: It is between HSS and SGSN. HSS is the subscription database in-home network for the LTE network.  Diameter is the protocol for the s6d interface. Diameter protocol uses TCP or SCTP.

To use data services, first, a mobile phone has to register itself with the network for GPRS. For registration, the SGSN sends authentication and update GPRS location request to the HLR, located in-home network. The protocol between SGSN and HLR is ss7.  GSM MAP protocol has messages for GPRS authentication and an update location procedure. GSM MAP uses SS7 layers as transport.  Once a subscriber is successfully authenticated and registered with the home network, a mobile device starts displaying data signs. Most of the cases it is E for 2G and H for 3G.

After successful registration of the phone for data, a subscriber can browse the internet.  This requires to set up a GTP tunnel with the home GGSN.  SGSN does signaling for tunnel setup with the GGSN. This requires the setup of the PDP context between the two nodes.

After a successful PDP context setup, actual user data flow between a mobile device and an external packet network

Lorem Ipsum is simply dummy text of the printing and typesetting industry. Lorem Ipsum has been the industry's standard dummy text ever since the 1500s, when an unknown printer took a galley of type and scrambled it to make a type specimen book.